Whether they are painters, drawers, musicians or designers, artists are extremely attentive to all they see around them and get inspired by it. This August 2, 2017 was a turning point in the humanity history. Indeed, we just exhausted all the resources the Earth can renew in a year. Now that environmental issues tops societal concerns, it guides the development of many artistic projects. The message of its creators and designers is unequivocal: it is time to rethink our communication mode and become aware of the urgency of planet situation.

Today we introduce to you the 7 projects exhibited during the second edtition of the Look Forward FashionTech Festival which aim to reduce our environmental footprint by decreasing our waste, taking care of  available resources or exploring new uses.

Danit Peleg, one of the most unmissable figure in FashionTech, allowed our visitors to discover a piece of the Birth of Venus collection. Entirely created by 3D printing, the exposed dress was introduced to the public by snowboarder Puerdy Anmy at the 2016 Paralympic Games opening ceremony.

Many do not understand the impressive technical feat executed by the designer. The dress, made with plastic filaments, is as fluid as any textile used in the fashion industry. In the long-term, this innovation can help reduce the number of plastic waste while using the amount of product needed to create a garment.

Designed by biomimicry, the jacket created by Birce Ozkan was inspired by the navigation system of migratory birds which detect changes in the earth’s magnetic field to orient themselves during their flights. The Augmented Jacket incorporates a micro-controller, servo motors and an electronic compass to indicate the North to its wearer thanks to a lifting of the feathers covering the jacket. Such an innovation can help humans to develop their sens of direction without other devices intervening as a GPS.

Other textile innovation exhibited at the Look Forward FashionTech Festival: QMilch. The designer and microbiologist Anke Domaske has developed a new ecological and responsible textile based on casein, a protein found in the cow milk. This innovation has been developed with a view to replacing the currently marketed textiles such as cotton or polyester. Effectively, these materials can contain pesticides or additives. This extra fine fiber, heated to 80 ° instead of 200 °, consumes less water and energy than most commercially available fibers.

In 2013, Pauline Van Dogen created the Solar Dress, the first project integrating solar panels into garments. A creation that became one of the mythical pieces of the world of FashionTech. Making our body a real renewable energy source, the dress is able to recharge a smartphone to 50% after being exposed to sunlight during one hour. This first creation from the Wearable Solar research has interested Wadden Sea Islands tourist guides who have some difficulties to recharge their devices during their working hours. In collaboration with the brand Blue Loop, the designer has launched in the development of a unique windbreaker. Through Alta Devices’ thin film solar and a battery, the wearer of the jacket can reload all types of devices (phone, GPS or camera) in two hours. Creations that proving that the imagination of designers can lead to the development of FashionTech innovations which help to find a viable and marketable solution to problems encountered by the population. 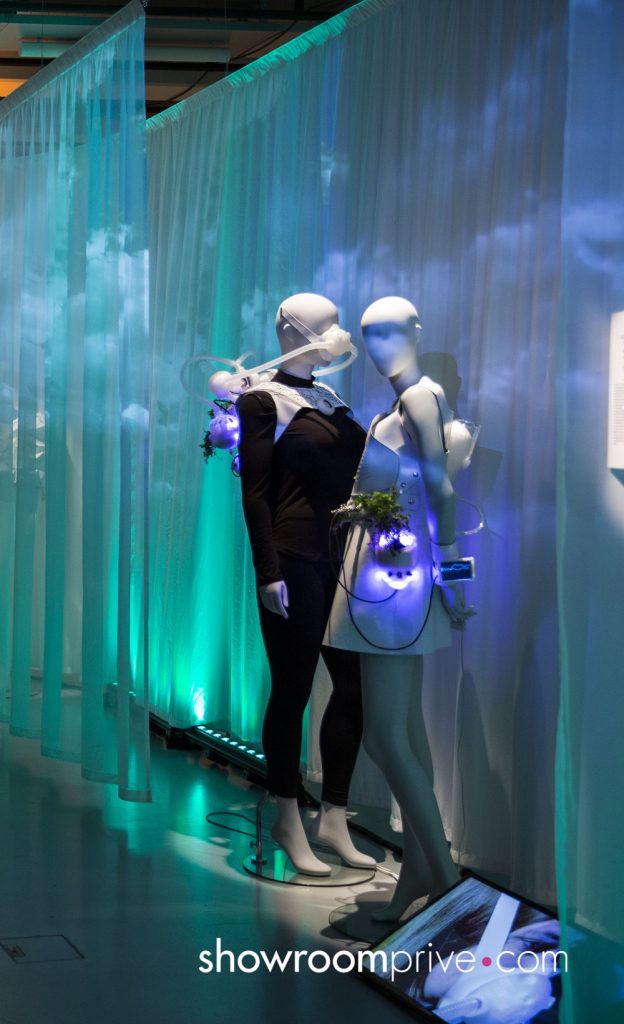 During the exhibition, visitors could see a project full of poetry: Symbiotic Interaction. This one combines two clothes which mesure the electrical vibrations emitted by plants thanks to a system of sensors and algorithms. This project was inspired by a previous one called Clorofila 3.0 which also studied the electrical impulses produced by plants according to environmental changes such as air quality. These changes are transcribed as sounds and are amplified by 1,000 so that they can be heard by humans. Extra-sensitive capacities of plants help to develop the wearer’s sensory abilities so he will be more attentive and better informed about his environment.

Human Sensor is one of the most spectacular and touching projects of the “Environmental Commitment”. Asthmatic since its early childhood, Kasia Molga has always been more reactive to air quality than most of us. By creating the Human Sensor costume, the artist wanted to share his experience to raise awareness around environmental pollution. The garment is able to measure the chemical composition of the air in real time through sensors placed in the mask collecting the data to be processed with a micro-computer. Then, the garment transcribed the results of the analysis. If the air is pure, the costume will alternate blue and white lights to the rhythm of the wearer’s breathing. Conversely, the more polluted the air is, the more the garment will become red. 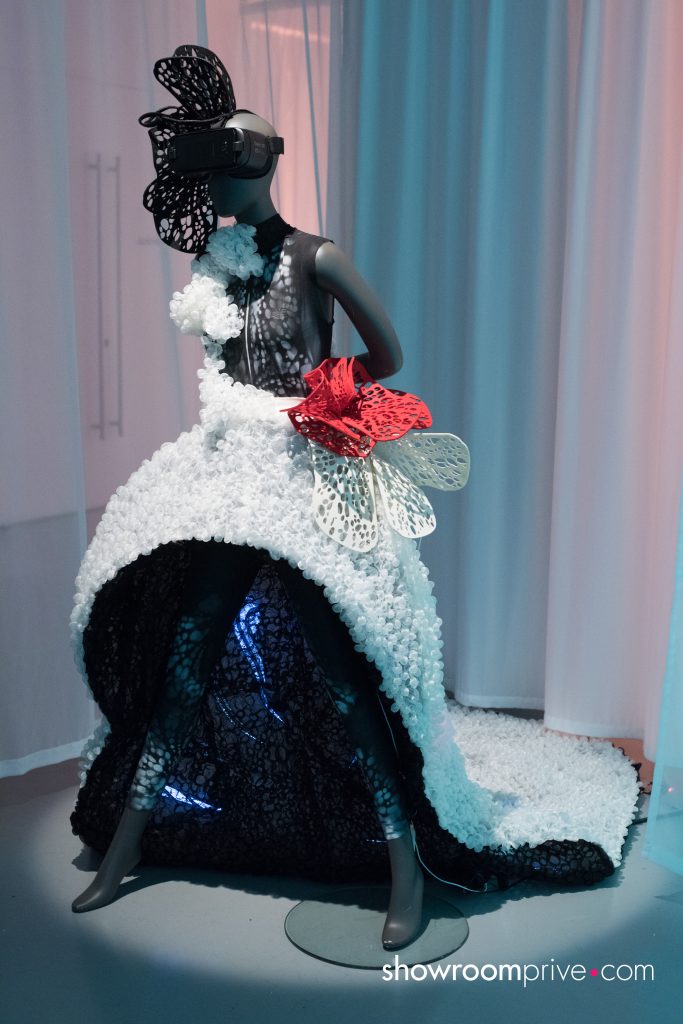 Last but not least, the Tranquilitie dress surprised the visitors by its originality. Unlike the aforementioned artists, Galina Mihaleva has focused his work on a pollution which is often ignored by the population: the noise pollution. Indeed, although people is not necessarily aware of it, the noise pollution can also profoundly affect the physical and mental health. So, the artist has tried to transporte wearers to the most serene environment on Earth by geolocalising it through Google Earth. The dress reflects the noise pollution rate of a place thanks to the sensors and LEDs on it. The project also contains a virtual reality mask that offers to wearers a total immersion.

As we have seen through the diversity of the innovations exhibited at the festival, the FashionTech is far from simple concentration of extravagant creations and push to think about real societal issues. With new technologies, fashion goes beyond the aesthetic aspect to become useful. The environmental cause is one of the most important and current themes, which explains the multiplication of innovations in this field. Although some initiatives have been marketed as the Windbreaker Pauline Van Dogen, many artistic creations developed in this sector have some difficulties to move beyond the statut of project because they are not easily transferable to everyday life. As Puma with the Piñatex project, acclaimed by the Look Forward Awards’ Jury, the big fashion companies should adapt innovations to the world of retail in order to make them more accessible and offer real solutions to an ever increasing pollution.