Until now the world of fashion was tangible and concrete. Fashion was a domain with predifined and materialized rules. But beyond the aesthetic aspect that garments bring, they transmit messages and emotions. They allow to transcribe the identity of a person, his origins, his hopes … Fashion is avant-garde, so it is not surprising that it takes its inspirations from technologies such as holograms, rear projection or virtual reality and pushes fashion designers to create a new means of communication at the border of the real and the virtual.

Today, we introduce you 8 projects that were exposed at the second edition of Look Forward FashionTech Festival exhibition. Discover or rediscover these creations playing between the intangible and the traditional fashion.

Let’s start with two particularly innovative projects: digital makeup. Nobumichi Asaï, from the WOW studio, surprised the audience with his creations: Connected Colors & Kacho Fugetsu. Japanese digital artist, he explores the art of facial mapping in real time. According to him, the natural world can be decomposed into algorithmic laws and, in this way, be similar to the computer programming. That is what the artist want to demonstrate through his works which encourage the dialogue between these both worlds.

For Connected Colors, the aim was to focus on colors that we can found in nature to create a digital makeup to highlight the human desire to live in harmony with our planet. The Kacho Fugest makeup offers a poetic show inspired once again by the nature and its diversity.

These artistic creations enabled visitors to realized that it is possible to sublimated himself by the unreal and the imaginary. Something that Lady Gaga understand too because she offers a musical but also digital show thanks to Nobumichi Asaï’s mapping during the Grammy Award of 2016.

With this creation, the exhibition of the Look Forward Fashion Tech Festival have touch the boundary between the tangible and the intangible once again. Designer for the Anrealage brand, Kunihiko Morinaga has share with us two pieces from the Reflect collection. Made of photosensitive fabrics, creations with neutral look actually hide colored patterns which can be revealed thanks to the flashes of visitor’s smartphones. This project leads to reflect on what is real or not. Between dream and illusion, the Reflect collection needs the intervention of digital online to reveal itself in broad daylight.

At the Look Forward FashionTech Festival we had the opportunity to introduce one of Ting Gao’s poetic creations: No(where) Now(here). Inspired by the essay « Esthétique de la disparition » written by Paul Virilio (1979), the dress moves as soon as someone contemplates it. A magic trick you say? It’s actually eye-catching! The work is made of photo-luminescent yarn and organza, one of the lightest materials avaible on the market. Like straight out of a fairy tale, the dress gives the impression of being sewn into threads of light and allows to think about the concept of presence and disappearance, the clear and obscurity. 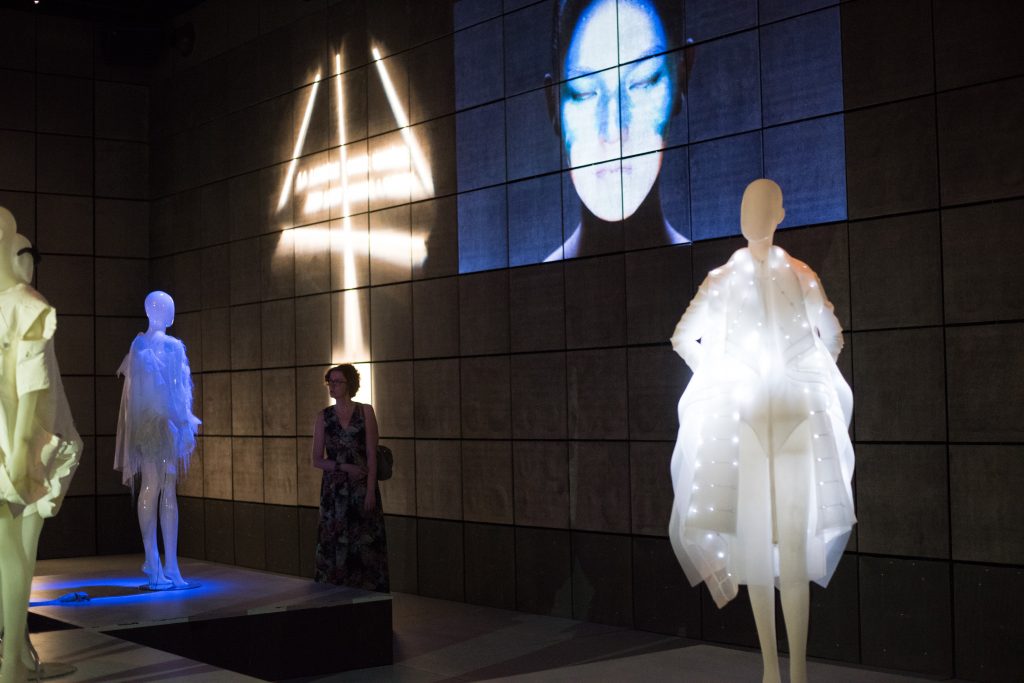 The Nuit Blanche jacket is inspired by those sleepless nights which help artists in their creative processes. In collaboration with Forster Rohner Textile Innovations, specialized in advanced embroidery techniques, Anja Dragan & Elecktrocouture have integrated 336 Osram LED lights into this garment. As traditional clothes, the jacket can be washed, folded ans ironed. So, the real achievement of this connected garment is into the fundamental utility of a garment. Like the Windbreaker that you discovered in a previous article, Nuit Blanche is a product that could be sold because it has the characteristics of a traditional garment.

For the second edition of the Look Forward Fashion Tech Festival, the artist Behnaz Farahi exposed a piece that is still being created: BodyScape. Unlike previous works, the creation is inspired by the functions of the human body. Through this project, the artist wanted the wearer of the costume to express himself through the movements of his own body. The piece is illuminated according to Langer lines, which are body parts with the least tension. Thanks to these lights, transcribed via microcontrollers and then a gyroscope that detects and tracks the movements of shoulders, BodyScape proposes a luminous choreography.

Drawing its inspiration from the interactive experience of virtual reality, Kailu Guan has created a collection that allows audience to have an immersive experience in two stages. Pushing back the limits of traditional fashion, the artist makes us discover her work for the first time without any artifice and, then, under a new dimension through augmented reality. It is thanks to screen printing techniques and the use of a smartphone that the printed patterns of the garment come to life, revealing the digital animations hidden in these creations.

Designer Beauty Tech with fertile imagination, Katia Vega is not at her first creation linking aesthetics and technology. In the Kinisi project, the artist has installed sensors on specific muscular points to capture the movements and the expressions of the wearer’s face. Transforming the face into a true interactive platform, the lipstick, false eyelashes and the eyeliner conductor allow its user to control the frequency of illumination of the LED lights.

Providing solutions to societal issues, FashionTech innovations can allow us to escape from them thanks to the creation of a new art which illustrate the transition from a outdated world to a future embracing the world of illusion. It isthe role of these creations to open the way towards a future of fashion accessible to all…