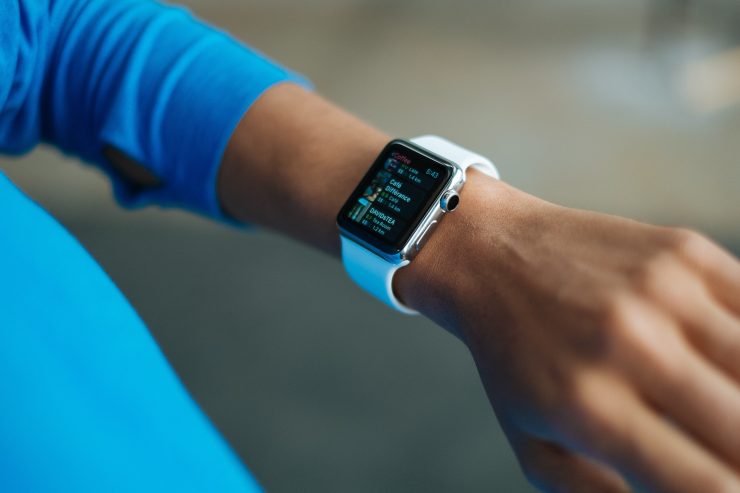 But applications are still a work in progress, initiatives on the matter coming from all countries and companies. Let’s take stock on what’s coming, and highlight how wearables technologies can improve the way we live, but also we get treated and recover from specific sickness.

I) AUTOTRACKING & PROMOTION OF A HEALTHIER LIFESTYLE

More than smartwatches and bracelets, other companies are trying to impose new forms of wearables allowing you to track your activity. Fitness still remains the most obvious application for wearable products.

Taking a step further technological integration, Sensoria’s second gen connected socks aim to track your runs in detail, offering information on pace, distance and time as well as your running style. They can help users run with better form thanks to a new AI coach, which can lead to faster times and a reduced risk of injury. Motiv is taking a smaller approach on fitness tracking with its new ring, a titanium-encased wearable to be worn on the finger, that tracks sleep and fitness stats (steps, calories, distance and heart rate) during three to five days.

But more than only tracking, wearables can also offer fitness related solution, like muscle stimulation : PowerDot is for example the world´s first connected wearable sports muscle stimulator, claiming to help different muscle groups recover, boosting strength, power and facilitates a faster recovery. Nevertheless, startups and larger companies like Jawbone, FitBit, Samsung have all tried to flood the wearable market with more and more precise products, but customers are still looking for others applications for their smart-rings and smartwatches.

Indeed, more than fitness tracking, consumers claims to monitor other aspects of their daily life thanks to wearables. According to Lumoid, a try -before-you-buy service focused on wearables technologies, over 72 percent of millennial women report wanting a wearable solely to track sleep — not steps, calories, nor heart rate. Such tracking systems exist mainly in two forms, sometimes even integrating a smart and silent alarm: startups developing bed furniture or smartwatches are numerous on the sleep-tracking market. Products as Sleepdot or Beddit are to be placed in mattress, duvet or pillows in order to track your sleep cycle, your movements and bad habits before going to bed. Paired with custom apps integrating a digital coach and gamification systems, such products could help you get better sleep, lower stress level, more tonus… Other are still betting on bracelets and watches focusing on sleep tracking, such as FitBit, without event talking of other king of wearable such as the Dreem headband, called Rhythm, influencing the way you sleep through audio vibrations.

Another trend is also following, with UV monitoring. We already talked about UV protection in one of our latest article, sharing with Wired Beauty co-founder Stanislas Vandier, but others projects are also even going furthermore, with sensors embedded directly in fabrics : the French fashion tech company Spinali Design has been busy creating connected clothing including jeans, dresses and bikinis. Thus, the Neviano UV Protect swimsuit collection is equipped with a removable medallion-style waterproof sensor that aims to prevent you from staying too long in the sun. Some are even incorporating in reusable skin patch, such as, L’Oréal’s, with a stretchy disposable device the size of a small plaster, featuring 16 tiny squares which change color when exposed to UV light. Launching this summer, the patch will be distributed for free during awareness campaigns against the danger of long exposition to sun.

But more than monitoring your sleep or your activity, wearables could also save your life – as simple as it looks.  A striking example would be WearSafe. During an accident, incident, or crisis, Wearsafe will instantly give their selected network all the information and tools needed to send the right help, sharing critical information with security and emergency responders easy. Combining alert management, dispatch aid, and incident reporting in a web-based central console, the device enables improved situational awareness and faster response times.  A dimension that could not be underlined as it also involves other industries, from healthcare to automotive, or insurance. This was highlighted during our Smart Textiles round panel, including Patrick Dixneuf (DG of Aviva France) taking part in it as a sponsor of our FashionTech Festival. (For further info, here is the full conference!)

Yet other clinically-focused, activity tracking wearables are developed, betting on the development of connected medicine. One from many other has now been cleared by the FDA, aimed specifically at the monitoring and treatment of Parkinson’s disease. The Personal KinetiGraph, from Australia-based Global Kinetics Corporation, can be prescribed to a Parkinson’s patient; the patient then takes the device and wears it at home. It can collect and store up to 10 days of movement data. This data is then downloaded by the physician, who can use it to obtain a more accurate assessment of the patient’s mobility than they could get from an office visit. The wrist-worn device is already in use in Australia, but has previously not been cleared for sale in the United States nor Europe.

Another example would be Braster, a Polish company that has patented state-of-the-art technology. Thanks to a unique liquid-crystal contact thermography technology, Braster detects thermal changes within breasts, which could mean malignant tumors. This is a safer and easier way to give yourself at-home examinations and detects any problems before it gets too important.

But more than simply ensuring a longer and more precise medical monitoring, some wearables can fully help people recovering from a disease in the comfort of their home, even replacing exercises prescribed by physiotherapists or osteopaths. The Rapael Smart Glove is an exoskeletal designed glove that assists people who have had strokes, and other patients with musculoskeletal injuries regain mobility in their hands. Using a Bluetooth sensor, the glove measures the patient’s motion through a 30-minute exercise, and creates an exercise schedule based on the patient’s needs and presented in a gamified interface. A version of the Rapael Smart Glove has been available in hospitals since 2014, but a new home edition is now available for patients in order to recover from home.  Another new product from Neofect, the Rapael Smart Board assists patients with shoulder and elbow mobility. Using game-based technology, the device creates exercises based on a patient’s ability and performance.

A last project that also caught our attention comes from London-based Doppel,  releasing a  “mood-changing” wearable. The device is worn with a sensor placed on the inside of the user’s wrist. It then emits a heartbeat-like vibration, which rhythm can be lowered or fasted at will, purportedly increasing alertness or calming one down. It will be launched in a few months and is already available for preorder!

If the mass market wearable industry is still a growing business, we tend to see more and more startups offering services towards new customers: not only healthy lifestyle enthusiasts, but also people who are really sick and healthcare professionals. The questions still remain the same: Will wearables startups finally meets consumers’ needs, and even go further in term of User Experience? How to ensure both privacy and security of collected data, especially on such sensible subjects as healthcare?