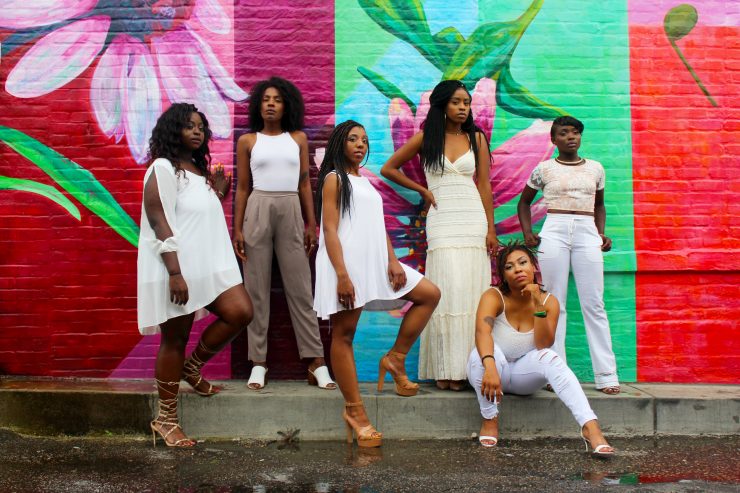 In the February issue of Vogue, Sarah Mower asks the question: With so much to feel outraged about these days, what can fashion contribute to the fight back? Plenty.

Fashion industry has never been that engaged in politic, economy and social. In the most polluant industry, principals actors understood that they couldn’t hide anymore behind glam, strass and elegance that the fashion industry reflects at first sight.  This industry is at the heart of all paradoxes: between luxury and misery, permanence and obsolescence, provocation and classicism, the fashion industry is like a complex mirror of our reality. Fashion tells a lot about our times, and consumers are more and more concerned about the ethics of a brand, fashion is about women and men who wear it but also about those who conceive, manufacture, transport or sell it.

Brands are more and more interested to engagement. The scandals era is over. Fashion industry makes its revolution. And the proper of a revolution, is to write a story to come that wants to be free and better.

Maria Grazia Chiuri, first women at the head of Dior, always wanted a feminine and feminist fashion. “Why Have There Been No Great Women Artists ?”, this is what we could read on the sailor worn by one of the models opening the show. A claim that we owe to Linda Nochlin, an American searcher in art history and devoted to the place of women in this macho environment.

Indeed, fashion show can be a place of improvised protests, in June 2017 during the Milan Fashion Week, Dolce & Gabbana’s podium has been a scene of a political claim. Raury, an american rapper, took advantages of the show to protest against the fact that the Italian brand dressed Melania Trump. At the end of the show, the singer removed his sweatshirt to reveal what was written in his chest. “Protest”, “D&G Give me freedom” and “I’m not your scapergoat”

The political conscience seems to have become unavoidable for fashion, indeed, awards have regularly been a “ground” of claims or solidarity. In January 2017, at the Screen Actors Guild Awards, Kerry Washington wore a safety pin on her dress to protest against Donald Trump’s policy. A month later, at the Oscars, Emma Stone wore a Planned Parenhood logo and, like others, supported the ACLU (United States Civil Liberties Union) with a blue ribbon. In January 2018, Golden Globes guests were dressed in black to support the Time’s up movement, following the sensational revelations of Harvey Weinstein, a producer and distributor accused of harassment, sexual assaults or even rape by dozens of women. Perhaps shocked at the scale of abuse facing women, Shonda Rhimes, Natalie Portman, Ashley Judd and America Ferrera were galvanised to create the Times Up campaign and, most crucially, establish funds to help women fight sexual predation in the workplace. Keen to bolster support, a request was made that those at the Golden Globes Awards held in January 2018 adhere to an all-black dress code. In a remarkable show of strength, the likes of Penelope Cruz, Margot Robbie, Nicole Kidman, Jessica Biel and Angelina Jolie all walked the red carpet in head-to-toe black, as did men such as Chris Hemsworth and Ewan McGregor.

A few weeks later, the Times Up team asked that those attending the Grammys wear white, or carry a white rose, resulting in Lady Gaga, Heidi Klum, Miley Cyrus and Zayn Malik turning up with white roses in hand. Singer Lorde went one better and wore the words of American artist Jenny Holzer as a sign on the back of her dress, which read: “Our times are intolerable. Take courage, for the worst is a harbinger of the best. Only dire circumstance can precipitate the overthrow of oppressors”.

Every moves that make the fashion industry are watched. Some have managed to take benefit of this power for politic and others have learned this dimension as their expense. Indeed, H & M has been a “victim” of a general indignation because of pictures published on their e-commerce website judged by the most as racist and provocative. Because of this scandal, the brand suffered of boycott calls and many personalities have taken part in this boycott. The Weekend having already collaborated with the brand said: “This morning, I woke up, shocked and embarrassed by this photo, I am deeply offended and I will never work with H & M again.” Same initiative for the rapper G-Eazy who was supposed to launch a line of clothes with the Scandinavian brand. “Whether it is an oblivion or not, it is truly sad and disturbing that something so insensitive from a racial and cultural point of view is seen by the eyes of so many (stylist, photographer, teams creatives and marketing) and deemed acceptable “.

Hollywood may be grabbing all the headlines, however, a much quieter uprising has been taking place in Iran. Since December, more than 30 women have been arrested for removing their headscarves in public, in defiance of the law. Unlike many other countries, the wearing of the headscarf is a legal requirement in Iran, and when Vida Movahed, better known as the Girl of Enghelab Street, took off her scarf in Tehran and waved it on a stick, she was arrested. Other women followed and were also arrested, and while most have been released on bail, one as-yet-unnamed woman was sentenced in early March to two years in jail as punishment for encouraging “corruption through the removal of the hijab in public”.

While it may feel as if the Hollywood protests are mundane in comparison, it does seem, seen as a wider picture, that there is a groundswell of support for change. Whether big or small is clearly up to the individual; however, it does seem to appear that now, more so than ever, it is time to wear our hearts on our sleeves.