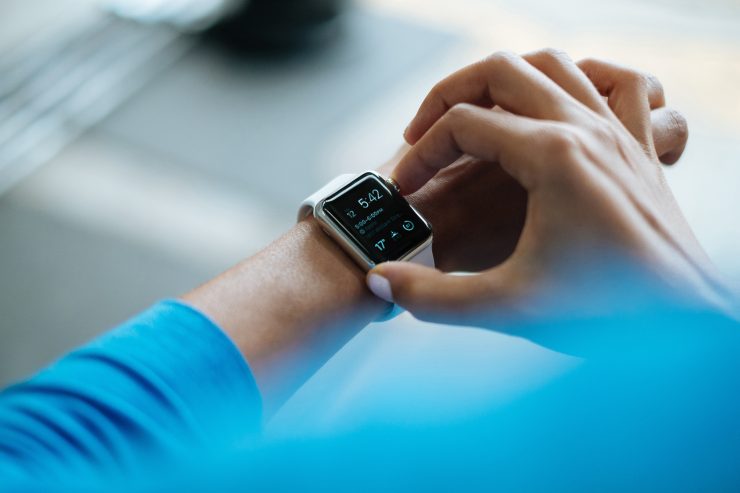 If apparel primary function was to protect us, this since has been amplified. In this last article presenting the different creations exhibited last July during our Look Forward FashionTech festival, we will discover the fourth section, dedicated to the projects augmenting our body’s abilities. This part of the exhibition presented garments and accessories experimenting an extreme fusion with the body, developing abilities spreading from the pursuit of comfort to the mutant creation of a super-body.

Whether it be through art, literature or technology, our minds speak out, but what about our bodies? The next two pieces offer a new and poetic approach to self-expression.

Technology and instinct with Batuque 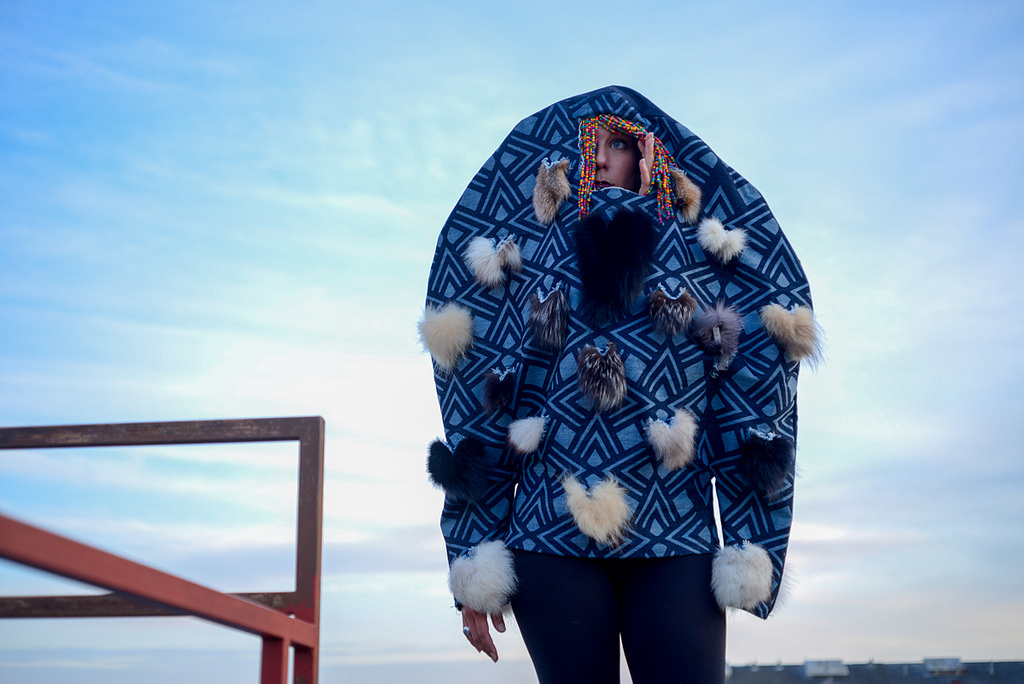 Batuque is a performance inspired by the Afro-Brazilian faith, Canomblé. Within this belief, the entities are represented by people dancing and wearing specific costumes as part of a ritual that transposes them into another dimension. ln this project, the wearer becomes a sort of creature or entity that has an extra sense. Reacting to the surrounding sounds, the ornaments on the clothing begin to vibrate as soon as another person approaches. lt’s reminiscent of an animal’s behavior when they are identifying a potential threat. The Batuque project gives the garment a capacity of life, instinct, and autonomy that transcends the body of the wearer. 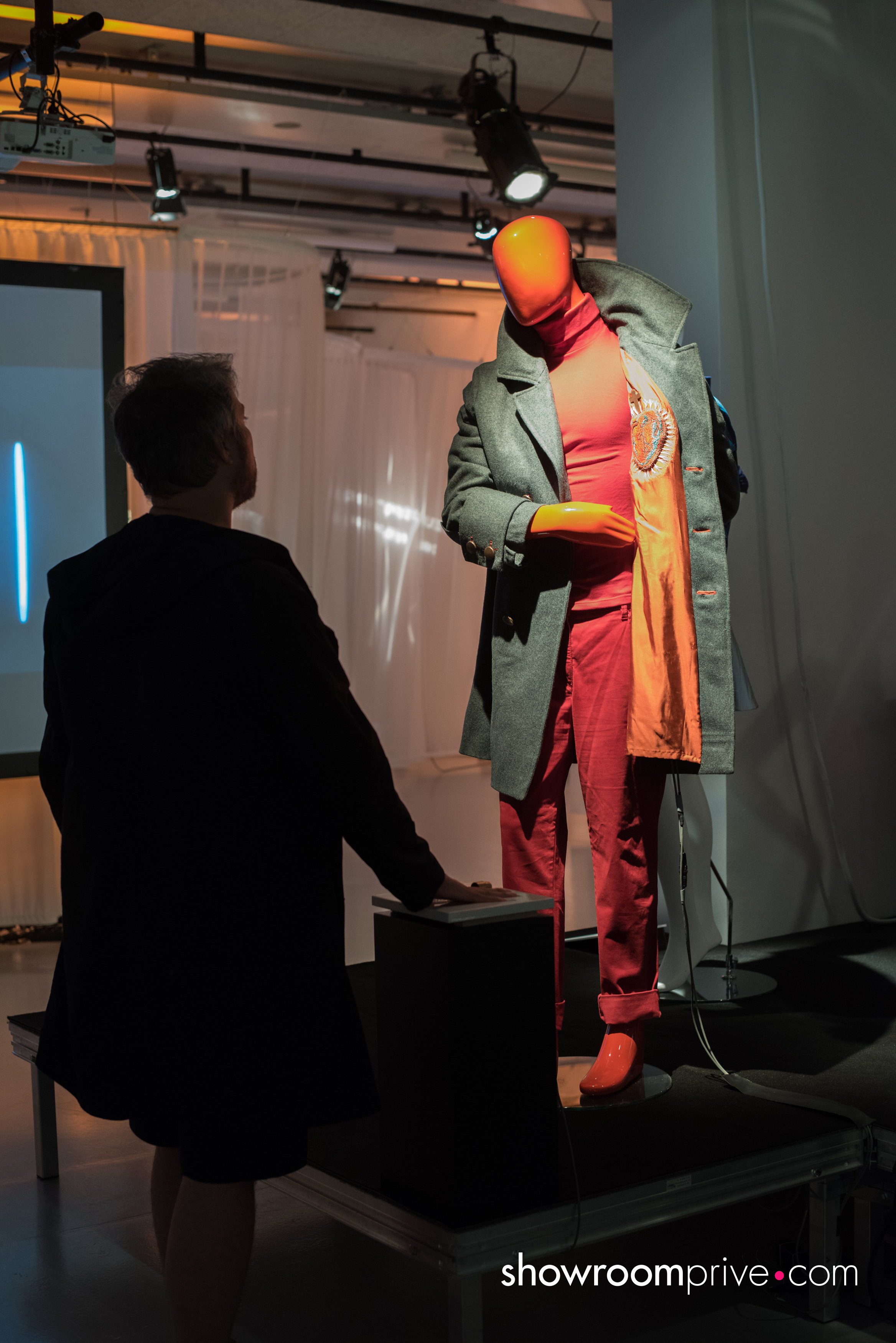 We are increasingly surrounded by objects that collect our data (phones, GPS, etc). Therefore, artist Stijn Ossevoort wondered: “What if objects wanted to possess something from us?” The Sacré Cœur coat has a fabric heart embroidered inside its lining, which connects the garment to an actual person and no longer to data. This coat was designed with an electrocardiogram sensor and a microprocessor, allowing the artificial heart to recognize, capture, and reproduce the heartbeat of its wearer in real time. The results are instantaneously visible through pulsating movements on the coat’s exterior. The heart glows with the rhythm of the beat.

What if clothes could bring us extra abilities? Where our body fails, some creations could fill the gap : that’s the case with The Sound Shirt, which replaces hearing loss by the touch, and with Dynamic Skin, which spots our body’s temperature to adjust it when needed.

Pushing our limits with The Sound Shirt

Sound Shirt was designed by the creative studio CuteCircuit in collaboration with the Junge Symphoniker Orchestra (Hamburg). The project aims to help deaf and hearing impaired individuals partake in the orchestral concert experience. Through a sophisticated technological system, this jacket converts the audio signais coming from the stage into varying pulses and vibrations. The wearer of the shirt can therefore physically feel the concert that is being performed in front of him or her. ln order to optimize this experiment, the lower bass sections are located in the lower parts of the torso while the lighter or sharper sections, such as the violin, are located at the top of the body. When the wearer looks at the orchestra he or she can very quickly understand the correlation between what is seen and what is felt. 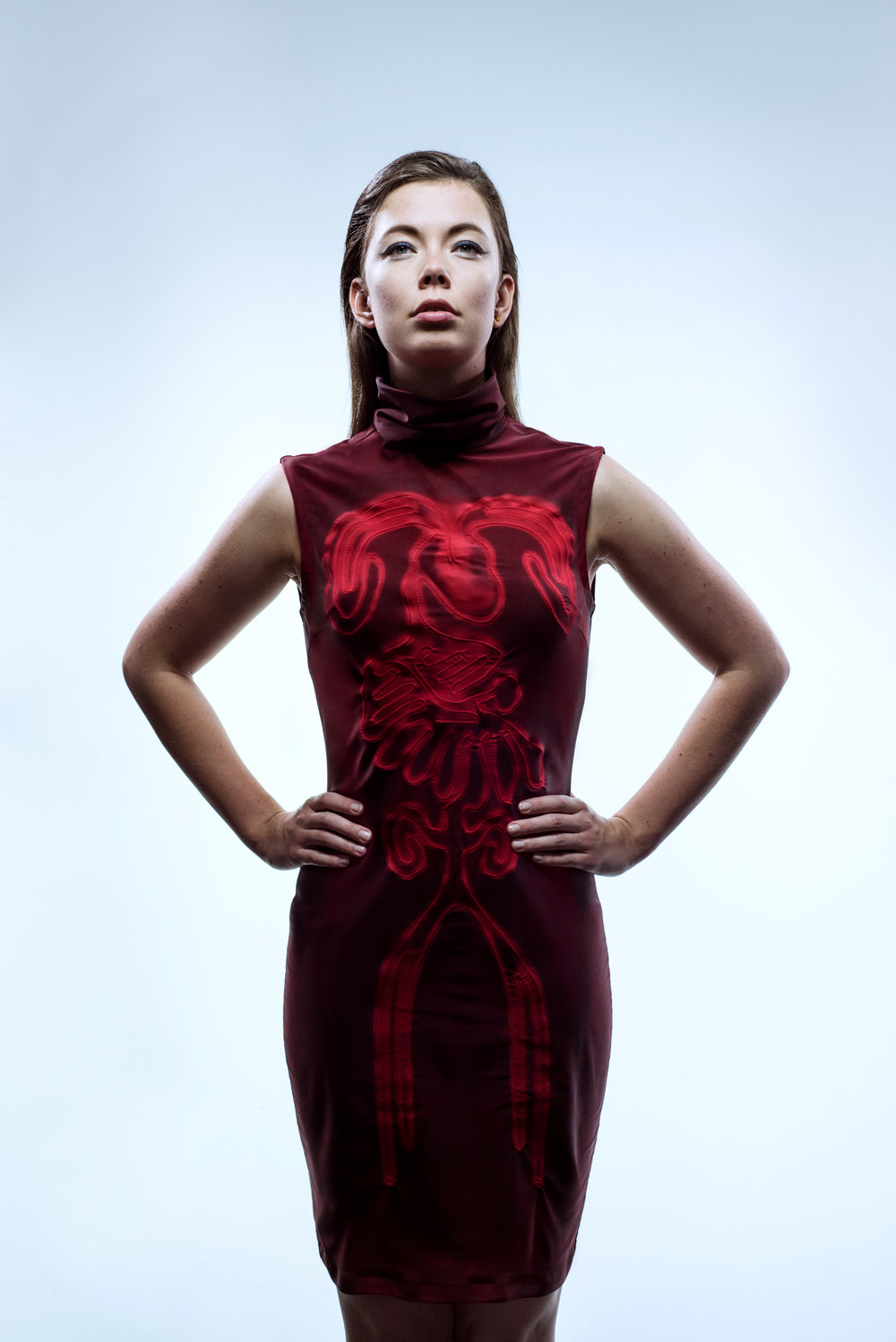 Generating other abilities with Dynamic Skin

Aniela Hoitink (Neffa) believes that textiles should respond to the wearer and not the other way around-textiles that actively provide protection or care without any conscious thought on the wearer’s behalf. Her latest project, Dynamic Skin, is a set of several pieces that collect and store solar energy. They then generate their own actions such as heat diffusion and light diffusion. lnspired by the human microbiota, the garments have a metabolism of their own. The Blood Circulation dress is designed with a thermochromatic ink that reacts to temperature. The wires inside the textile change the color of the garment, illustrating the internai blood circulation of the wearer. Beyond this stunning visual presentation, the dress actually produces heat as well.

Hollywood filmmakers dreamt it: virtual and physical now make one, and our body plays the link between both. Since October, 17th 2017 and until August, 19th 2018, the exhibition “Effets spéciaux, crevez l’écran !” (Special effects, take over the screen!), which takes place at the Cité des Sciences et de l’Industrie de Paris, unveils all the tricks behind special effects. With the four creations following, no more need of special effects. Our body can become music, creating it and diffusing it, but also a virtual information receiver, or even a wave diffuser. 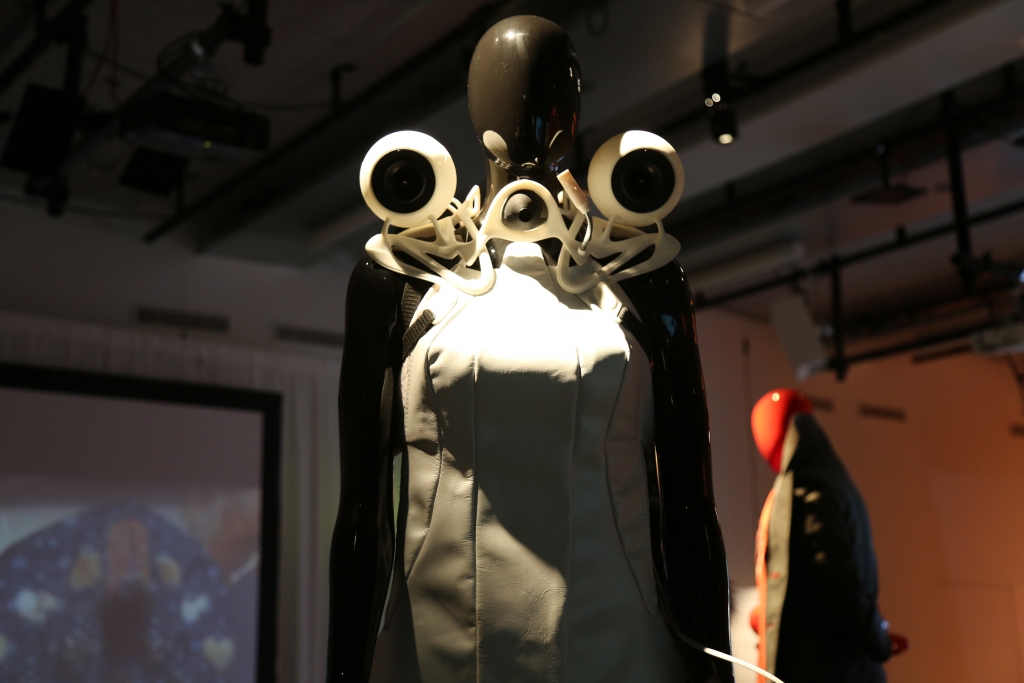 Speaker Dress is the newest creation of Anouk Wipprecht. realized in the framework of a residence at Pier9 (AutoDesk + Abmeton). As a follow-up to her previous projects, this garment augments our body through new, creative features. A set of sensors located on the front of the dress allows the wearer to compose music simply by using his or her hands. The music is broadcast in real time on Igor Knezevic’s “Alienology” loudspeakers. which are located on the wearer’s shoulders. By staying true to her extravagant and festive spirit, Anouk Wipprecht transforms the body into a veritable, mobile hi-fi system capable of composing and generating music in complete autonomy.

Skinterface imagined by The F_T_R collective is a skinsuit that allows you to go from the physical world into the virtual world-crossing an imaginary threshold and completely entering into an alternative reality. Skinterface enables two-way physical interactions with computer-simulated abjects and environments, creating a fully immersive experience. Located and tracked through 3D space, the suit is equipped with sophisticated actuators which convey subtle sensations, effectively converting virtual interaction into physical feelings. Postulating a hypothesis of a possible interaction between the physical world with digital abjects and/or people, the range of upcoming applications is abundant; ranging from entertainment and communication to virtual prototyping.

Viktoria Modesta is a bionic pop artist. An accident at birth left her with a damaged leg, and in 2007 she had a voluntary amputation. She now works in music, fashion, performance art, technology and medicine. The viral video project Prototype for Channel 4 #BornRisky campaign has globally presented the idea of “the body as art” concept with themes of redesigning the body, and the social fear of approaching people with alternative body types. She challenges the stereotypes of female beauty and disability throughout the video, with a series of avant-garde prostheses are displayed in all their grandeur along with costumes, “Assemble me piece by piece ( … ) l’m the prototype” she sings. Through this clip and the span of her career, Viktoria Modesta invites each of us to choose our own identity and accept that technology, fashion, and the body are a way for us to reveal our innermost selves with confidence. 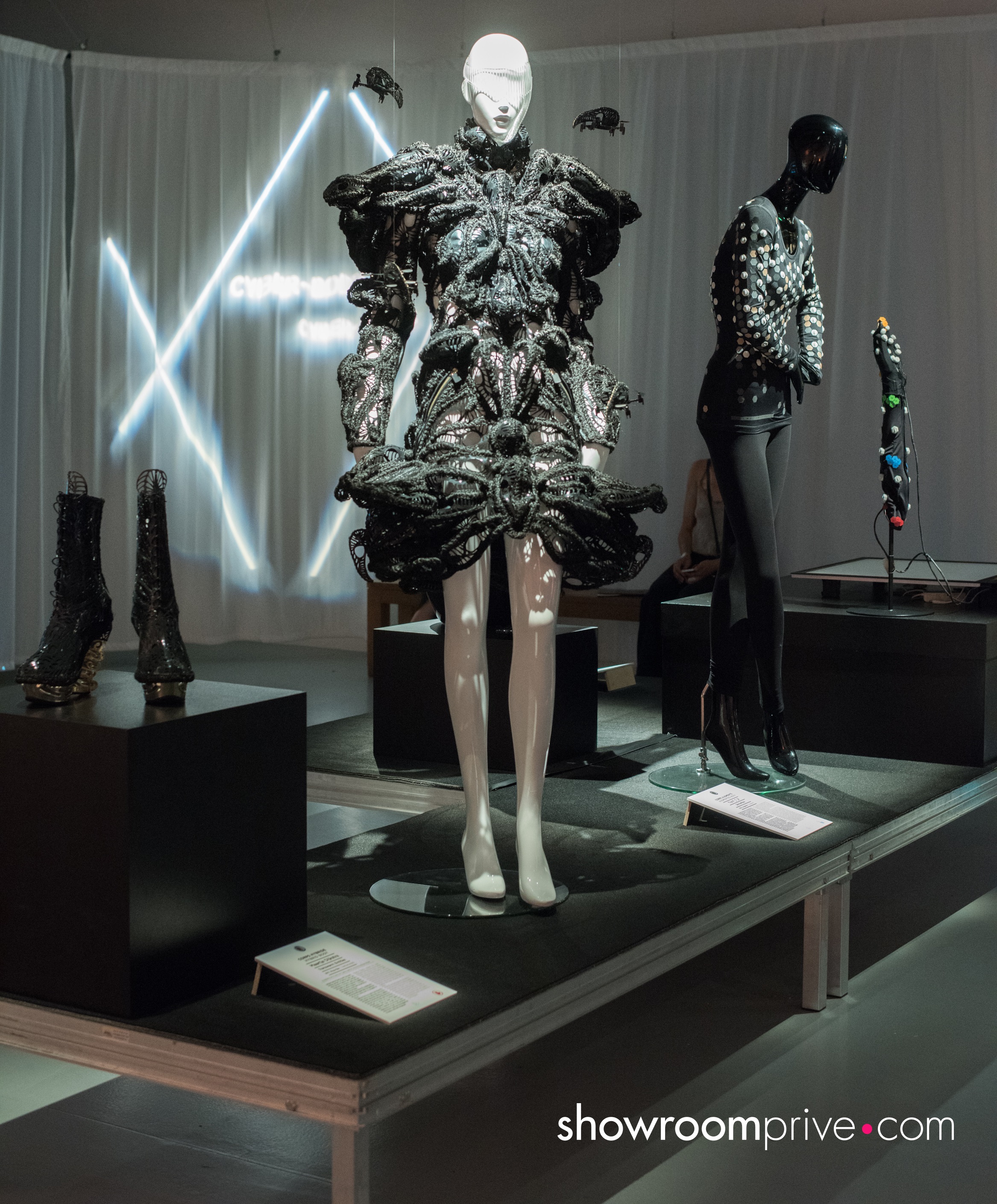 Maartje Dijkstra created the dress Transwarm Entities during the Fashion Fusion Lab-a three month workshop sponsored by Deutsche Telekom, Berlin. This dress is sculptural and evolving, composed of small repeated fragments (sort of like birds’ skulls) in the manner of cells that build a complex organism. The bird skulls are manual 3D printed with a 3Dprinter-pen and manually sculptured together with black polyester and silk wires. Small 3D-printed fragments are able to move freely thanks to a tracking system developed by Bitcraze. Four separate drones then corne up so parts of the dress look like they’re flying away. Thanks to the tracking system that runs on radio waves, drones move to the rhythm of music by producer Newk and create a choreographed swarm controlled by a music program.

FashionTech artists work our body to understand its limits and comprehend in what extent can technology help surpass them. Though the different creations exhibited, clothes have their own functioning, their own life complementary to ours, and becomes a window to our physiology. In a very poetic yet aesthetic way, artists give us their vision of the relationship between what is shown and what is hidden. May the human body be updating to a 2.0 version?