There is two weeks ago since we launch the second edition of the Look Forward FashionTech Festival. If the stress and excitement of the festival have calmed, memories remain intact. It seems like the perfect time to dive back into the spirit of the festival and revisit some of our highlights from three weeks ago.

As you already know, our festival have been launched on June 28th, 2017. Through the conferences and round tables the Gaîté Lyrique’s visitors were able to discover the fashion in a new light. Between haute couture and high-tech innovation, the event led to the democratization of FashionTech, a subject that matter to Showroomprivé. Indeed, European leader of  event-driven online sales, Showroomprivé  evolve into a digital world at the service of the fashion. Based on a double DNA fashion and digital, the company prioritises innovation in order to anticipate the requests of customers and offer them the best in terms of product lines, mobility, delivery and payment solution. 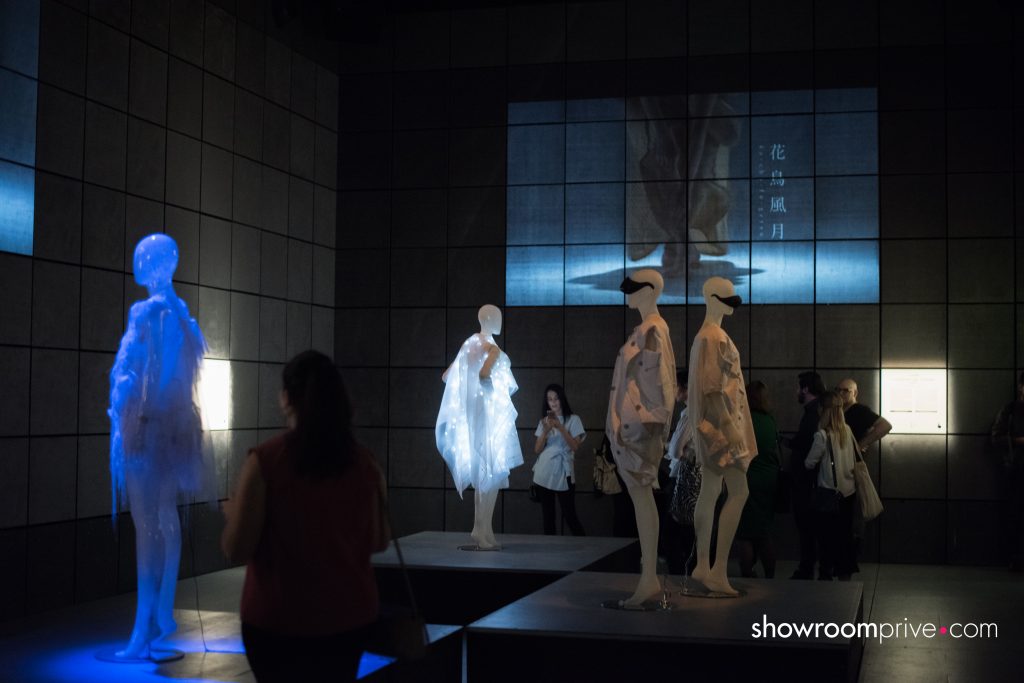 The innovation has became a real corporate policy by keeping innovative startups nearest, sustaining visionary projects, sharing the result of discoveries. Look Forward is an incubator which promotes innovative projects that are at the interface between fashion and digital worlds. 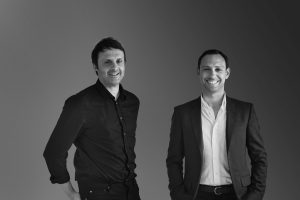 « As the unique one and pioneer, the FashionTech festival is a way to share with the greatest number of people our discoveries in terms of inventions and innovations in fashion and retail. It’s important to be aware that huge innovations have already been developed and could revolutionize the fashion and retail of tomorrow. The Look Forward FashionTech Festival has the task of taking visitors into the imagination of forward-thinking brands and creators. »

The vernissage of the event has been the opportunity to welcome almost 800 people from fashion, beauty and tech: companies, stratups, artists, influencers and personalities… We have been pleased to saw all these people exchanged about the merger between fashion and technologies. It is in this context that we were delighted to have with us M.Jean-Louis Missika, member of Paris Council and Deputy Mayor of Paris in charge of town-planning, architecture, Greater Paris projects, economic development and attractiveness. In June, Paris hosted several international events dedicated to innovation in all its forms to highlight the vitality of this sector and give more visibility to these events. The City of Paris had decided to create the Paris Tech Festival to federate and celebrate these initiatives. We are so proud that the Look Forward FashionTech Festival had been part of this movement.

There were a international fashion and tech panel at this opening, proof that FashionTech is becoming more and more important: from the young Ukrainian designer Anna K whose clothes already sold in the most prestigious stores all around the world, through Frédéric Arnaud, Production Director at Chloé, Nicolas Santi-Weil, Executive Director of AMI Paris, Sébastien Badault, Director General of Alibaba France, and Muchaneta Kapfunde, Founder and Editor-in-chief of Fashnerd, a head of her time.

From the very first minutes, the tone was set for the rest of the evening with « Expecting to Fly » performance by Geneviève Favre Petroff. This visual and scenic artist performed in front of our visitors and create a surprising contrast: a woman singing a song dressed in a luminous dress shaped like a cloud, there, in the entrance of the Gaîté Lyrique. The same artist who recently told us in Paris Match that she is passionate by the concept of total art gathering sound, lights, poetry and interaction with the public, reappeared a few moments later dressed in her custom named “Loukoum”, delivering us a luminous and colorful show. During her last and final performance, “Electra”, the artist turned into an enchanting singer illuminating and captivating the attention of the attendees. This last show, punctuated by electronic music and melodious notes calling for the consumption of “Cranberry Juice”, was created for her performance in New York City. 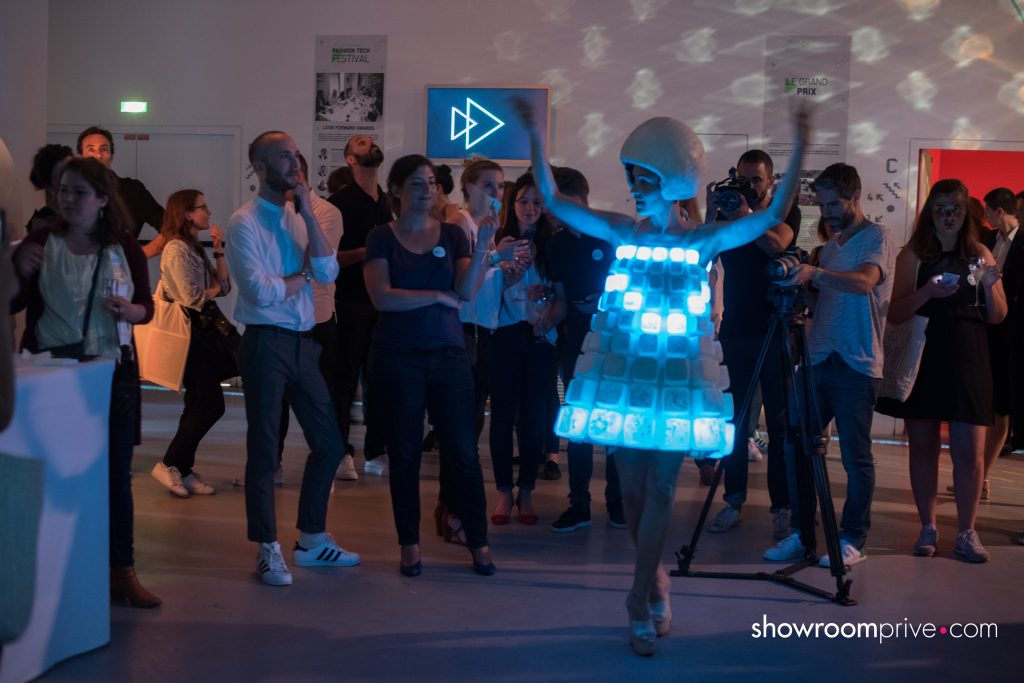 Our VIPs could move wherever they wanted in the Foyer Historique and the Foyer Moderne of the Gaîté Lyrique to mingle or pose for a picture. The cocktail have been the occasion to highlight the startups and companies projects that were awarded by the jury of the Look Forward Awards which we mentioned in a previous article.

Once in possession of their glasses of champagne and favorite appetizers, it was up to our visitors to discover the craziest and most futuristic creations of our time through the artists present for the occasion: Anouk Wipprecht, Stijn Ossevoort, Anja Dragan, Lisa Lang and the list goes on… 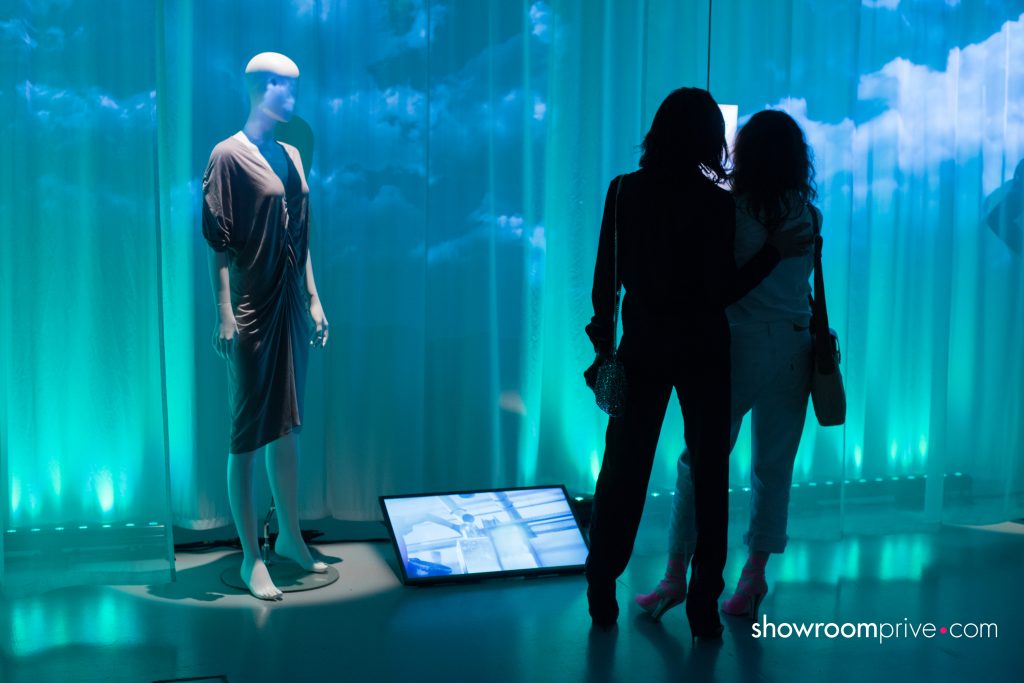 The scenography of the exhibition offered an immersion across thirty creations divided into four major societal themes: “Environmental Commitment”, “Impact of the Immaterial”, “Intimacy and Society” and finally ” Towards an Augmented Body “. These themes warned and pushed people to think about the issues we face on a daily basis.

Finally, cherry on the cake: the store of the festival!

For the record, the Gaîté Lyrique’s shop was newly opened since few weeks when we decided to sell within it articles from young structures of the French FashionTech such as 3D printed jewelry from Maître Cube, wallets with a wireless charger from De Rigueur, or even INDUO fabric shirts that resist stains and sweat. 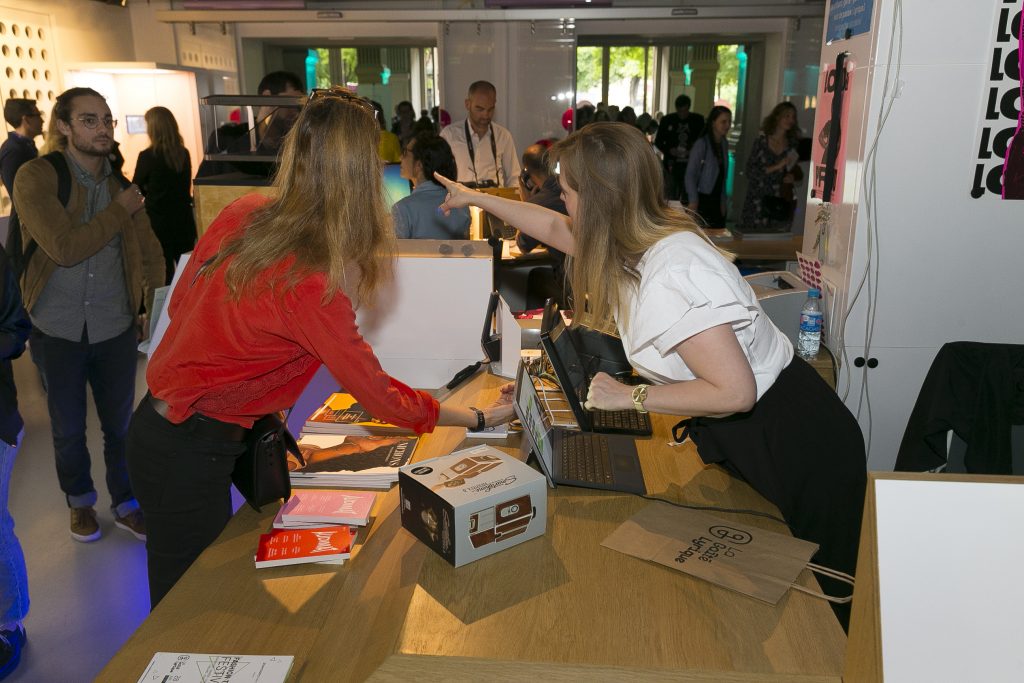 At the opening, the idea was to offer a complete and brand new experience to our guests thanks to our collaboration with Oney, a major player in innovative new payment solutions. It was a special watch made for the evening and allowing our visitors to test the contactless payment via NFC technology and Holusion prisms, displaying payment information in holograms: “It is an efficient mean of payment that can be successful! ” underlined Jean-Louis Missika. While Caroline de Maigret found it very funny “this freedom to be able to walk and pay: a very nice time saving”, Mademoiselle Agnes concluded by emphasizing on the effectiveness and the intelligence of gesture associated with the payment. A successful bet for Oney!

We have just finished the festival but we are constantly thinking about what we will be able to do for the next edition. In order to soften your frustration we are preparing some articles that will allow you to relive the Look Forward FashionTech Festival 2017… So do not worry, we still have things to puts sparkles in your eyes 😉

The opening of the event through some pictures :